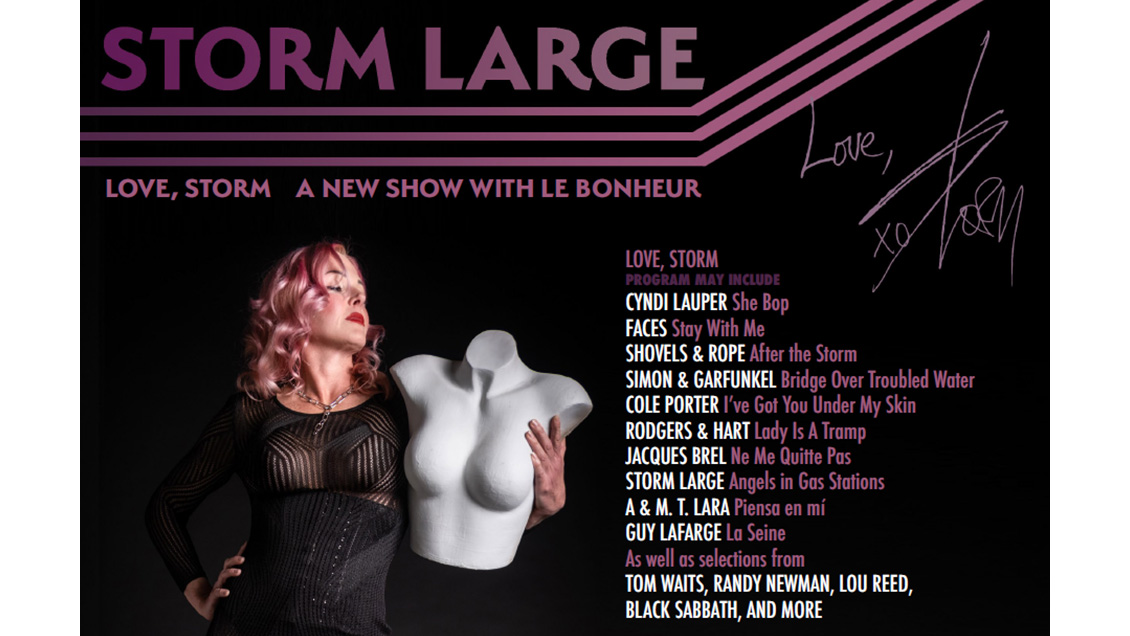 Make it a date night at the Wachholz College Center for Valentine's Day, with Pink Martini vocalist, Storm Large! Take advantage of our special Valentine VIP package for just $99.00. The package includes: 2 tickets in premium, main floor front section 2 drink vouchers redeemable for a champagne, beer, wine or hard seltzer at the Wachholz College Center concession bars 2 chocolate covered strawberries Enter promo code LOVE to access this special Valentine VIP package pricing. For mature audiences. Rescheduled from November 29, 2022, LOVE, STORM is a new show featuring a playlist of songs by pop ­luminaries, rock goddesses, Storm’s fiery originals, and much more. The show is—after so much time apart—a love letter from Storm to her fans to tell them how much she’s missed them.   Storm Large shot to national prominence in 2006 as a finalist on the CBS show Rock Star: Supernova, where despite having been eliminated in the week before the finale, Storm built a fan base that follows her around the world to this day. She was seen on the 2021 season of America’s Got Talent, and when she isn’t touring with her own band, acting, or writing, Storm Large performs internationally with Pink Martini. Storm made her debut as guest vocalist with the band Pink Martini in April 2011, singing four sold-out concerts with the National Symphony Orchestra at the Kennedy Center in Washington, DC. She continues to perform with the band, touring nationally and internationally, and she is featured on their album Get Happy. Storm has also sung with k.d. lang, Kirill Gerstein, John Doe, Rufus Wainwright, and George Clinton. Artist Website Ticket prices range from $42 to $70, not including ticket service fees. This show is presented by WCC. No outside food or beverages allowed in Wachholz College Center. Recommended age limit 16+ (mature audiences) Lobby doors open 90 minutes prior to show start.